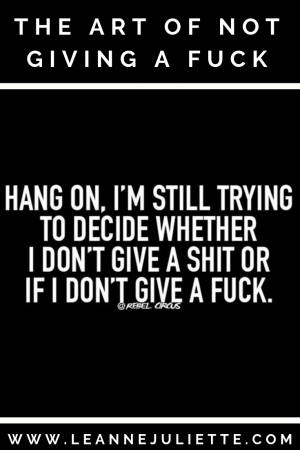 As I sit here at my desk with my fingers poised ready to write, I asked myself what I desire to write today. I’ve already journalled this morning and had some awesome things come out but I knew there was something more that I wanted to write. So I asked myself, as I always do, what does my soul desire to share with the world today. And I heard very clearly, “The Art Of Not Giving A Fuck”.

Right up my street!! Especially since I’ve been moving more and more into the energy of being totally unapologetic, unfiltered, raw and real. Which isn’t to say that I wasn’t before…it’s been a very transformative year…but as we know, every next level version of us requires us to dig that little bit deeper into who we are and to move our feet from the murky water holding us back at times.

So why do we actually give a fuck?

Plenty of reasons…mainly because its from shadow energy. Because somewhere inside of us there’s a part of us that is bothered by what people think. Like being too much of a People Pleaser. Putting the needs (and opinions) of others above our own. Which seems like a selfless thing to do at first…but really…it’s bullshit.

Because when we give a fuck…it shows that we aren’t really owning all of who we are. Especially those of us who are Entrepreneurs. Because stepping out onto that skinny branch on your own can be pretty daunting at first. Knowing you’re here to create impact through your message and your purpose work…but also knowing that, if you’re like me…a non-conformist Rebel…that you’ll piss people off along the way.

When you’re an Entrepreneur who is here to create massive change in the world through your soul’s purpose…it requires you to really dig deeper into who you are, really understand who you are and most importantly, why you have this desire within you to do whatever it is you are being called to do…and that it simply won’t go away until you do the very thing you’re here to do.

It’s an art to not giving a fuck. It really is.

Take it from me…I was the girl who was a massive introvert growing up. Who was known as “Little Miss Shy Shy” on holiday. The one who let people walk all over her at school. The one who wouldn’t ask for what she really wanted…because she didn’t want to upset others. The one who put others needs above her own…at the expense of her own happiness. The one who stayed in shitty relationships that didn’t light her up from within. The one who stayed in crappy unsatisfying jobs because she had no savings and plenty of debt and felt shackled to the jobs.

I gave a lot of fucks.

I learnt that my needs weren’t important enough. That to ask for what I really wanted was to come across as ungrateful for what I had. Or greedy for wanting more. I believed others opinions of me when I was told I was too much or not to do this or not to say that. And I learnt that it was easier to put others needs above my own…because it caused less hassle.

That’s what happens when you give too many fucks.

You sacrifice who you are. You dampen your own soul. You pour water on your own fire. You become the kind of person who just exists…without really living.

If you know what I mean.

When my spiritual awakening started 2 years ago, I really started to uncover more of who I am. Unearthing hidden secrets to myself. Things I knew about myself…but hadn’t dared accept…for fear of being too much or too weird or too…whatever.

I’d already been on an entrepreneurial journey since 2012 when I’d joined my first MLM business. But never found true satisfaction from those companies…mainly because of the cliquey as fuck people I was surrounded by at the time. I still didn’t feel like I fitted in. The Misfit Entrepreneur. Because I could see through the illusions and the bullshit and the masks.

I gave too many fucks back then. Trying to please others. Spending more than I had just to fit in and to be seen to be active within those companies. Going along to events that I couldn’t afford because of the bullying tactics that were used by some that “if you are serious about this business, you’ll be at XYZ event…and if you want to be taken seriously by your upline and be coached by them…you’ll do what you can to be at that event”.

Honestly…I’m amazed I stuck with it for so long. My soul was screaming “this is fucking bullshit!!!” and yet my ego allowed me to be carried along by the bullying tactics…just so I could fit in.

Because I gave too many fucks.

Far more than they really deserved if I’m honest!

So when I knew that my job was due to end last year (it was a wind down of a temporary contract), I knew it was my launch pad for me. For my business. For whatever it was that I was supposed to put out into the world.

Because believe me…I had no fucking idea what I was here to do. I just had to follow that calling…and trust. And learn not to give any fucks.

The more I leaned into myself…the more I pissed people off. Like my soon to be ex husband. Because I was becoming who I was always meant to be.

And I wasn’t a doormat anymore. For anyone. Yes I’d still trip myself up at times…like a fledgling bird who has just discovered her wings…there’s gonna be times where you flap around for a bit, you may fall, you may get caught up in things, you may try to take off but end up not quite doing it.

Because you start to remember what’s important.

That what truly matters is being happy.

And being happy means following your soul. Following your calling. Giving yourself permission to be all of you.

And not giving a fuck.

It really is an art. Because you’re learning how to unfuck your mind. Unfuck your mind from all the bullshit beliefs you adopted as your own.

These aren’t your beliefs. These are whatever bullshit conditioning you’ve adopted as your own. Programming passed down from others.

Turn down the volume from others.

Block out the bullshit.

Because people will try and steer you back to them. Throwing fear at you like fucking confetti. Trying to stop you from truly being all of who you are.

Sometimes…it’s from them giving up on their own dreams.

Sometimes…it’s simply from a lack of understanding about the impact you’re here to create.

Irrelevant of what it is…if you’re an Entrepreneur who is here to create massive impact in the world through your purpose work, then here’s a newsflash for you:

Because the more you give a fuck…the more you’re holding back your unique magic from the world. Your medicine. The impact you’re here to create.

The more you give a fuck…the more you filter your truth…the more polished and professional you are…the more you are repelling those who you’re supposed to work with.

The soulmate clients who you already have soul contracts with. The ones you agreed to work with before you both incarnated into this lifetime.

When you give a fuck…you literally repel those you’re supposed to work with.

Because you’re trying so bloody hard to appease those who you aren’t here to work with.

By actually giving a fuck what people think, what they’ll say and what their opinions of you may be…you actually put a huge fucking barrier between you and the people you’re supposed to work with.

Because energy is energy.

And the souls you’re here to work with…the ones you are here to massively impact just from simply being who you are…all of you…are waiting for you to learn the art of not giving a fuck and just simply be all of you.

In everything you do.

In everything you say.

However which way you please.

Be all of you. And stop giving a fuck by trying to appease those who you aren’t here to work with.

Believe me, your soul work fucking matters. Being an entrepreneur allows you to create the impact you came here to make.

So start showing the fuck up. Stop giving a fuck.

Be the whole damn fire.