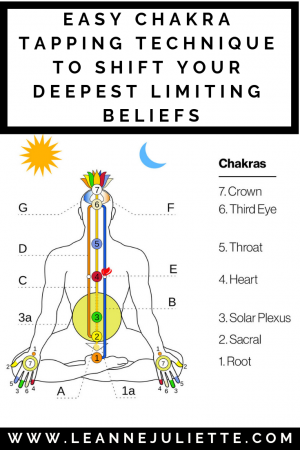 Let’s talk and look at how beliefs impact you emotionally, mentally and physically. You’ll also learn how to transform them with chakra tapping, the simple, yet life-changing technique that you can use to reprogram your brain and body to eliminate old, limiting beliefs and instill empowering beliefs that will take you and your life into a next level.

Most of us, at some point, were taught that thoughts and emotions are “just in our heads.” Thanks to research done over the past few decades, we now know that’s not true. A simple belief, in fact, creates a cascade of emotional and physical reactions. In other words, one thought—one belief—can shift your entire experience at any given moment.

These changes happen so fast and so automatically that we’re often unaware of them. Neuroscientists estimate that we operate at least 95% of our lives from subconscious programs. Say what?

That’s a H-U-G-E number! Without our conscious awareness, the subconscious mind hijacks our emotions and body by initiating what’s called the stress response. Oops!

Limiting beliefs are where I find the jackpot with most clients. Most of us, and I was no exception, have many reasons not to heal. This is because our challenge may actually benefit us in some way, or we believe deep down that it does. I know that might sound a bit ridiculous, but by the end of this, you’ll understand it very well.

In this article, you’ll first become familiar with what limiting beliefs are and how they might be showing up in your life. Toward the end, I’ll teach you my favorite technique to help you clear those harmful beliefs that are blocking you: The Chakra Tapping.

How Beliefs Can Block You From Succeeding

Do you have a pattern of feeling worse the more you try to feel better? Have you tried everything and it feels like nothing is working? Do you begin to improve and then suddenly have a flare-up of your emotional or physical symptoms? Do you struggle with a pattern of self-sabotage, even finding it difficult to help yourself when you know you need to?

If this describes you, I can almost guarantee that your limiting beliefs are getting in your the way of overcoming whatever your challenge is and from living a fulfilled life. This is because your subconscious mind might be blocking you from not only your treatment efforts but also your healing ability through those limiting beliefs. One reason this happens is because, at some level, you actually have an inner conflict about healing. This type of inner conflict occurs when one part of us wants to change, but the other part (often the subconscious) does not want to change because it believes the change is not good for us. Simply put, it’s a resistance to your goal, which sabotages your efforts.

Even though your conscious mind is doing everything it can think of to heal, your subconscious mind may be holding what it thinks are very good reasons not to heal or overcome your challenge in the form of strong limiting beliefs. Part of you may see the challenge or illness as an upside or benefit, which is better in some way than being well. This means you perceive there is a benefit to your challenge.

Chakras, the spinning energy centers in the body, hold old stories and experiences in their energies. Their energies are directly tied to early childhood programming and conditioning, which makes them a great access point into limiting beliefs.

During my own healing and reprogramming, I started off using Emotional Freedom Technique (EFT) to challenge my very own limiting beliefs. This worked quite well. However, as I discovered more about the chakras and how they hold our energetic history within them, I began to explore using them to clear beliefs. Remember, beliefs are really just old stories, far away from truth and usually from earlier in our lives.

With this connection between beliefs and the chakra system in mind, I wondered if it might make sense to tap directly on the chakras instead of using EFT tapping points, which are associated with the meridian system. I tried it, and voilà!  I felt like I often got a deeper clearing than with EFT while also giving those ever-so-important chakras some attention too. We’re going to use a very similar process to what you learned for EFT, but we’ll tap on chakra points to address the chakra system instead. Easy peasy!

Though you may be familiar with the chakras, I’ll briefly review them as a reminder of how old stories might have found energetic homes in various places in your body. For each chakra that we review here, I’ve also added its tapping point so you’ll know exactly where to tap for this technique in order to remove a limiting belief. 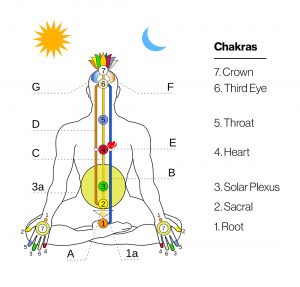 Crown (Seventh) Chakra — Located on the top of the head, the crown chakra symbolizes spirituality and your connection to a higher power. It is tied to the energy of knowing you can trust life, that you are being taken care of and guided. The focus of the crown chakra is to help you connect with your purpose in life and your connection to a higher source. Tapping Point: top of the head.

Third Eye or Brow (Sixth) Chakra — This chakra is located directly between the eyebrows. It represents intuition, imagination, reflection, and the ability to see things for what or how they are (interpretation). Its focus is vision and inner guidance. Tapping Point: in between the eyebrows (be extra gentle with this point).

Heart (Fourth) Chakra — The heart chakra is located in the center of your chest. It is linked to love, intimacy, forgiveness, and the ability to send and receive love. It’s also responsible for your heart’s desires and helping you manifest those desires. Its focus is love, relationships, and inner healing. Tapping Point: in the middle of the chest, at your heart’s center.

Solar Plexus (Third) Chakra — The solar plexus chakra, located just below the sternum, governs your sense of personal power, including your personal choices and actions in the world. Its energy is tied to self-confidence, self-esteem, and a feeling of being in control of your life. It stores your judgments and opinions about the world and yourself. Its focus is personal power and a positive mentality. Tapping Point: right under the sternum at your solar plexus.

Sacral (Second) Chakra — The sacral chakra, also referred to as the womb chakra, is located in the pelvis behind the navel. It relates to your creativity and feelings and is also linked to childlike joy. It represents sexuality and is tied closely to your stories and conditioning from childhood. Its focus is feelings, creativity, and joy. Tapping Point: just below the belly button.

Root (First) Chakra — The root chakra is located at the base of the spine. It represents your feelings of safety and survival. It’s connected to early childhood limiting beliefs, money, and identity. It deals with issues of abandonment, unworthiness, and insecurity. Its focus is safety, security, and survival. Tapping Point: lower sacrum or top of your thighs. (Using flat hands to gently slap your thighs, pretend you are continuously motioning for a puppy to come sit on your lap.)

For the first part, you will simply insert the limiting belief. For the second part, you will insert any positive statement to balance the set-up. You are essentially telling yourself that even though something bad happened (first part), there is a positive, too (second part).

As a reminder, here are some positive ideas you could use for the second part of the set-up statement:

Step 2: Use Your Set-Up Statement While Tapping the Karate Chop Point—Now you’ll continuously tap on the karate chop point (the outside of your hand, about halfway between the bottom of your pinky and your wrist) while saying the full set-up statement three times.

Step 3: Tap Through the Rest of the Points—Next, you’re going to simply tap through the rest of the chakra points and talk about the limiting belief. You can use a mix of stating the belief, talking about how you feel about it, wondering aloud how you might have gotten it, and more. This is essentially a bit of improv!

The simple goal is to focus on this limiting belief so we can bring up the energy and clear it. It’s okay to temporarily focus on the belief; it will not get embedded in your system just by acknowledging it. In fact, this is essential to releasing it. The words you use are not at all important for this first round. You just need to talk about it and bring it up.

To show you how this could go, let’s use the example limiting belief of I’ll end up alone if I heal. Here is what that might look like:

Top of head: I might end up alone.
Third eye: I haven’t taken care of myself in so long, I don’t remember how!
Throat: If no one helps me, I’ll just get sick again.
Heart: It reminds me of when I turned eighteen and Mom said, “You’re on your own!”
Solar plexus: I’m so frustrated that this is keeping me from healing.
Belly button: But I believe that if I get better, people will just ditch me
Top of thighs: Part of me really believes I can’t take care of myself.

Now you are going to repeat what you did in round 1 for several more rounds. It’s okay, and sometimes even beneficial, not to use the same exact words and phrases from the first round. Just go with whatever comes up naturally.

Step 4: Break — Take a tapping break and a few deep breaths. Yawn or sigh if you need to. This little bit of time will help your body process the energy and release it fully.

Step 5: Last (5th) Round — Finally, you want to tap through the points one more time while stating a positive affirmation that you’d like to take in. This should ideally oppose the energy of what you just cleared. Example: It’s safe to heal now. Alternatively, you can use the phrase healing at each tapping point.

It often takes persistence and commitment. You can repeat the chakra-tapping process a few more times. You can tap on chakras to move any type of stagnant energy. Just use gentle tapping for several minutes on any chakra that you feel might be blocked. The key is to be consistent with the technique of your choice to make it work and shift our thoughts from the root. I hope that you enjoy and benefit from this experience and technique!

Azu Lopez is a Mindset for Business Success Coach committed to make a Quantum Transformation for female CEO's, coaches and entrepreneurs. Devoted mother of a little boy and big Chai Latte drinker.

You can connect further with Azu here: 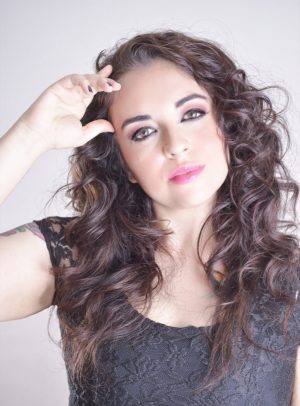 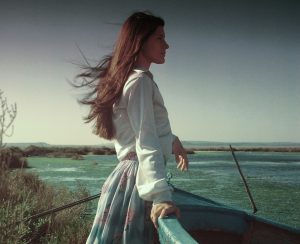