Why It’s Important To Speak Your Truth…Always 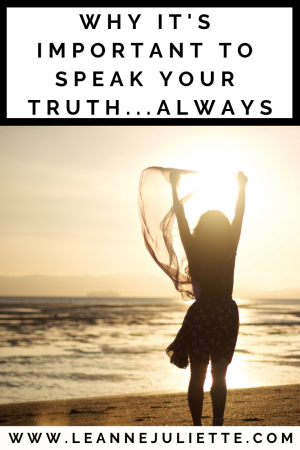 I’m a huge advocate for speaking your truth.

Probably because I spent most of my life…not.  I was (still am slightly…I’m working on it!!!) always a people-pleaser. Going along with what others wanted. What was important to them. What they needed. Instead of speaking up and saying what I want, what I needed and what was important to me.

Thankfully, I’m now able to recognise when I step into that people-pleaser mode…give my head a shake…and change tact LOL

So many people…women especially…are scard to speak our truth. Scared to say what we really want, scared of being judged, scared of being shut out by others, scared to just be seen as our most Authentic Self.

I know a lot of this stems back to the many lifetimes we’ve had where we’ve been persecuted, judged and for some, condemned to death, simply for being ourselves.

Plus it’s also part and parcel of the patriarchal society we are thankfully moving away from…where women have been seen as more of a hindrance than a help.

As some who was always the people pleaser, I’m hugely passionate about being an advocate for other women to speak their truth.

I was the girl at school who just went along with what her friends wanted. Sometimes lending things to friends and never getting them back…but not saying anything about this. I once lent my pocket money to a friend for a school trip because she didn’t have any…and she spent most of it! But I said nothing.

I’ve come a long long way since those days…I recognise now that my relationships were built on the zero self-worth that I had for myself. There was a pattern they all followed…even those I was totally attracted to and had chemisty with…there was still a pattern of zero self-worth that followed me around and meant I wouldn’t express what I truly wanted.

It’s so eye-opening when you start doing the inner work and start learning more about yourself and why you are a certain way and why you’ve had certain experiences.

Being more aware of the need to speak my truth, I see it so much with others when they aren’t speaking their truth:

So many are scared to speak their truth.

Scared to stand up for what they really want.

Scared to vocalise what’s important to them.

Scared to be seen to rock the boat.

Scared to put themselves out there into the spotlight for fear of being rejected.

Again, this stems back to how women have been treated over millenia. Not important enough. Not to be seen or heart. Subservient to men. And this gets caught up in our soul’s DNA…something we know we want to break through and thankfully we are in an age now where more and more women are speaking our truth because we recognise how important it is to do so.

Just look at the #metoo movement. That is huge! Women everywhere speaking their truth, unafraid to be seen, unafraid of the consequences. Because they recognise that it’s so much better to speak their truth…because ultimately it helps others further down the line.

Just think….by you speaking up for what you want in your life, what is the potential for that to impact on others? If you speak up for what you want in a relationship, then you are saying you deserve to be treated with respect, which means that you are in a more satisfying relationship which will impact on your life as a whole because you’ll be happier.

By speaking up and sharing who you are, with no worry about what people think of you…you are encouraging others to do the same, you are showing that it’s ok to be yourself, so others also embody this…which impacts on society as a whole.

I realised this myself today

Since my spiritual awakening 18 months ago and learning more about myself at a deeper soul level, I’ve realised that I was playing small for most of my life. Worried about being seen. Worried about rocking the boat with some relationships. Worried about losing my job if I spoke up about people’s bullying behaviour. I was always the people-pleaser. Always putting others needs and actions above my own.

It’s no surprise that my throat chakra (the chakra that governs speaking our Divine Truth) had stuck energy. That’s why I like to joke about “taking my throat chakra out for some exercise” when I speak my truth LOL

Today I had the realisation that everything I share and everything that I do…matters.

It had a profound effect on me.

Showing up more and more on online platforms such as Facebook and YouTube has really been about me pushing through the confines of my self-imposed limiting beliefs. Such as:

Because I used to worry that by speaking my truth and sharing what’s important to me and what I like, that I may not be liked by others. Again, there goes that people-pleaser Leanne…and she was told to fuck off a while ago LOL.

Stepping up onto YouTube took a huge leap of faith for me! Because I started my YouTube channel doing Tarot readings in September 2018 and worrying that people would think I’m a shit Tarot Reader (I’m not, I’m fucking awesome!), that I’d be a laughing stock and people wouldn’t subscribe.

But they did subscribe. And they left amazing comments at how spot on I am with my readings. And how much they love my energy in the videos.

And all that came from speaking my truth and doing what I was being called to do. To create video content and share who Leanne Juliette is.

I realised today how much my truth…my messages…my content…matter. Because people follow you…even if they don’t make themselves known by liking or commenting on what you share or by reaching out. They still see you. They still take note of what you are saying especially when they can relate it back to their own life.

Last night I received a beautiful voicenote from a fellow entrepreneur who connected with me a few months ago on Facebook. We’ve never met in person. And I rarely see her on my posts. But, like I say, people are still watching. Last night she thanked me for sharing what I share. For being myself. Because what I talk about really resonates with her and she’s found my voice helpful for where she’s at in her life.

And today, a message from someone who I met years ago through a business we were both involved with, reaching out because she’d seen my post about looking for guest bloggers/vloggers and wanted to collaborate for research she’s doing with her own book. And yet, she’s never one to comment or like my posts.

See what I’m saying?! Your message, your truth…matters. Just because people aren’t making themselves known on what you share, it doesn’t mean that they aren’t seeing it and that it’s not speaking to them in one way or another.

Because, you never know who is watching or listening to or reading your content. You don’t.

But that is why it’s so so so fucking important to keep sharing your truth.

Speaking up for what you believe in.

Putting yourself out there even if you think nobody is watching (believe me, they are!).

Showing up as your most Authentic Self…so that you give permission to others to show up as theirs.

You matter and your truth matters.

That’s why it’s so important to speak your truth…always. Because you never know the impact that your truth can have on another. We are all connected energetically as One. And when one speaks his/her truth, it will have an impact on another and encourage them to speak their truth. And so on.

Stop worrying that you don’t matter.

Stop worrying that you can’t have an impact on the world.

Stop worrying about pissing someone off with your message (you won’t be everyone’s cup of tea, but that’s irrelavant, nobody can appeal to everyone).

And just watch how the Universe shows up for you and opens doors for you that you didn’t think were possible.

Are you showing up and speaking your truth? If not, what’s stopping you? Share in the comments!