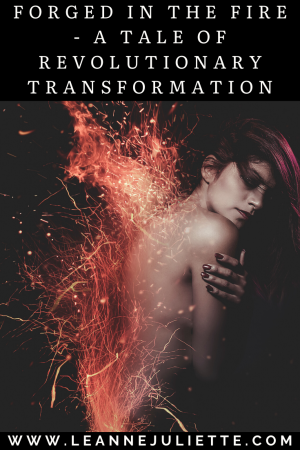 Forged in the fire is how I think of my own Revolutionary Transformation which began with my Spiritual Awakening  around August 2017. It’s when I first felt the calling to start searching within myself.

Seeking the truth of who I am.

It’s when my gifts started calling. Louder and louder. Until I actually listened.

I wouldn’t be known as The Spiritual Catalyst if my soul and Higher Consciousness didn’t put myself through the fire first!

This is my gift to the world…the fire I offer…my energy is the gift.

In order to facilitate revolutionary transformation within others…I had to experience it myself.

I laugh now as I write this. Oh how much my life has changed in 2 years!

June is my Rebirth month.

When I was reborn.

June 2018 was when I was stripped bare of everything I had clung onto for security.

Burnt to a crisp.

This is the epic glee that my soul takes in facilitating revolutionary transformation.

June 2018 was the month when my mum was diagnosed with and treated for breast cancer for the second time.

June 2018 was the month my long-term temporary contract finished. Leaving me unemployed. Again. With no savings. But a dream to work for myself.

June 2018 was the month I left an emotionally abusive marriage. Toxic for both of us.

June 2018 was the month I became a single-parent to my then 3 year old daughter. Something I had never envisioned for my life.

If June 2018 were a meme, it would look like someone being handcuffed – naked – to an electric fence whilst a truck load of shit is being poured onto their head.

With the caption, “Shit Happens”.

June 2018 goes down as an epic month in the grand scheme of things for me.

It was the catalyst for the trajectory of my life towards creating a multi-million pound Spiritual Empire. The vision I am working towards.

Thrown into the fire – in order to grow.

Thrown into the fire – in order to experience what fire feels like.

Thrown into the fire – in order to be able to look my clients in the eyes and say “I know what you’re going through, you’ve got this. Trust me. Surrender”.

Thrown into the fire – in order to be able to facililate true transformation within the Collective Ascension.

This what my soul loves!!! Transformation! Death. Rebirth. Fire. Which is why I have so much fun with my clients who work with me for that exact thing.

Transformation. Of the epic kind! Across life, business, relationships and spirituality.

I have a lot of fondness for the girl I was back then. Lacking in confidence. Feelings of unworthiness. Uncertain of who she was. Frustrated with life. Feeling a calling deeper within her – but no fucking clue what she was to do. Questioning if this was all that life had to offer.

The level of determination of this girl is astounding.

No matter what was thrown at her – or dumped on her – she continued to pick her sorry bones up off the floor, taking a moment to dust herself off, ragged, bruised, burnt – but with fire still burning brightly within her soul.

Using fire as a compass for her path.

I have a lot of love for this girl!! She went through so much, stripped bare as her ego and shadow continued to cling onto the illusion of safety and security that was never hers to cling onto.

When you build a life upon unstable foundations, no matter how much you try to repair the shaky foundations, what you’ve built will always fall down eventually.

No matter what though, she persisted. Again and again. Knowing that this was her calling. To be stripped. To be chewed up and spat out from Kali’s mouth.

Thrown into the fire so that her ashes could birth new life.

Here I sit today, 2 years on, a very very very different woman to the girl I was back then. Yet she burns bright within me. Guiding me. Having stepped aside for me to take her place.

Back then, if I’d been told what I would go through in order to become who I am today, I would have literally shit myself with fear!

In the time since then, I had to learn how to stand on my own 2 feet.

Security is an illusion when we seek security in that which isn’t for our highest good.

The lack of self-love.

The toxic people we have around us.

The lack of boundaries.

With death, nothing truly ends though. The spirit leaves it’s mortal body behind and continues on it’s journey of enlightenment.

When I went through my own “death” – the Death of Self – Ego Death – I was fearful, uncertain, worried about my future and how I’d provide for my young daughter.

I had to grow up very fucking fast.

The Death of Self that I experienced was a catalyst for life.

Just as I am a catalyst for those I work with and those who find themselves within my energy. Guided to me unknowingly because of the soul contract we have for me to facilitate and activate revolutionary transformation within them.

Whether their ego self likes it or not.

When the Universe comes calling – when you are activated in such a way – stripped of all that you took for granted which was based in the false illusion of security – you cannot hide away.

The more you hide, the further you’ll fall, and the harder the bump at the end will be.

Clinging onto the edge of the cliff with your bare, sweaty hands in the burning midday heat as ravenous vultures soar overhead ready to eat your carcass when you hit the bottom of the ravine.

My journey has not been easy. Is anything truly worth it ever easy?!

I had to let go of a lot of beliefs around who I was. I had to go deeper into my own shadow to find the gold within.

Taking the path into Hades – into the darkness – in order to find myself.

Trusting in the unknown.

Learning to surrender to my Higher Self who continued to berate me for clinging onto ego and shadow.

I was put through my paces with lesson after lesson as I continued to cling onto illusion. Desperate. Battered. Bruised.

I had to learn to set huge energetic boundaries as energy vampires continued to show up in my inbox looking for freebies with the work I did.

I had money stolen from me by a female coach who said she’d help me with my business.

I had people turn on me because my powerful energy triggered the fuck out of their ego.

I was filmed by my ex on my doorstep.

I went through a challenging divorce.

I went round and round in circles with my business as I continued to play it safe.

I had to admit I couldn’t pay the debts I had which were crippling me.

And all the time, I learnt how to use the fire for growth. Seeing experience after experience as a catalyst for my own revolutionary transformation.

Refusing to be beaten by life. Continually searching for the growth and using the experiences as my fuel to rise higher and higher.

Expanding my wings further and further.

Looking The Devil in the eyes and telling him to fuck right off. I wasn’t to be messed with.

When you no longer fear Death itself, such as Death of Ego, the rise into who you were born to be becomes easier and easier.

That’s not to say you’ll never be challenged. Far from it. Being human is about growing through experiences. It’s why our souls came to Earth School.

To learn. To evolve.

Which means facing your darkness, tuning into shadow, and being prepared to surrender to the power within you which defies logic.

I wouldn’t be who I am today without having gone through everything I’ve gone through. Nothing is ever in vain. Every experience is a golden coin waiting to be plucked from the pot at the end of the rainbow.

Even the time I was pinned down by my neck and punched repeatedly on my arm by my now ex-husband after our argument escalated out of control.

I have no blame. No hatred. No anger.

Which is why I have had to learn over and over again to set very high boundaries across all areas of my life. Because back then, I had none.

I had to learn the hard way. That the more I wallowed in lack of self-worth, the more I would attract situations and people to me to reinforce that belief that I was worthless

No longer do I feel like that. Because I learnt how to accept – and love – myself. And put the needs of myself and my daughter above anything else.

Which is why I don’t tolerate shitty people and those weighed down with toxicity. It’s the reason why I block people on social media so freely now – with zero guilt – when they try bringing their own unhealed shadow over to my “garden”.

I am no longer a people pleaser.

My energy, my fucking rules.

Believe it or not, being stripped bare is not the worst thing that can happen to you.

Being stripped bare is liberating as fuck as you surrender to a force you cannot see. But you feel it.

The worst thing that people do is take no fucking action towards their own vision. Hiding. Stuck. Fearful. Accepting their lot in life instead of rolling up their sleeves and being prepared to get real fucking dirty as they face their fears, shadow and ego head on.

My Spiritual Awakening was the catalyst to liberate me from a life that didn’t feel like a “fuck yes” to me. Allowing me to be stripped in order to shed the skin I’d clung onto for so long – a skin of loneliness and uncertainty – so that I could actually set my soul free.

This is what Revolutionary Transformation looks like – freedom to exist in the truth of who you are.

Forged within the fire to create your own freedom.