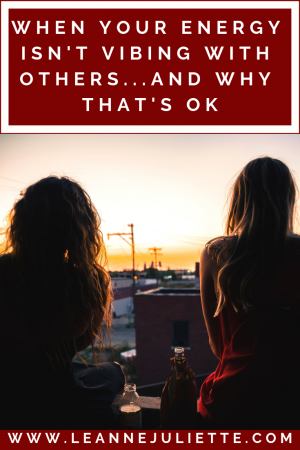 I speak a lot about being a people pleaser and how I used to constantly put others needs first even if it made me miserable, drained me or made me question myself LOL! My energy was all over the place!

Since really tuning into my own energy and reconnecting with myself 8 months on from leaving my marriage, I’ve started to understand more and more how important it is to do an energy check on those you are connecting with.

Energy is energy and we all sense energy…even those who don’t consider themselves to be Empaths or clairsentient like myself…we all sense energy. Every single one of us – it’s not something reserved specifically for those intuitives, energy workers or psychics amongst us. It’s just that some of us are more sensitive to energy and as such we can pick up on the subtleties in someone’s energy.

Being able to pick up on energy and fine tuning how I do this has become one of my favourite things to do! I’ve always been able to read people…I just didn’t realise that that is what I was doing and I thought that everyone was like me. I’ve always been sensitive to energy changes – the subtle change in someone’s body language, listening between the lines to what they are saying and seeing their message in their eyes. It’s pretty cool and I love being a highly intuitive Empath!!

Since leaving my marriage and really embracing who I am and enjoying becoming me again…I’ve really noticed a huge shift in how much I sense energy. And when you start tuning in more and fine tuning this powerful tool…it’s amazing how much it can have a positive impact on your life.

Like clearing out energy (people) that no longer serves you, so freeing yourself up for those who are an energetic match for you and who light you up!

For example, I used to worry when I sensed that someone didn’t like me. The anxious me would worry that I’d done or said something wrong. That it had been me who was at fault. Instead of opening my eyes and my energy and tuning into the energy of the person and their intentions. Most of the time, as I know that my particular Empath energy does trigger people (it’s who I am and what I chose as one of my soul gifts…I am a Light Bringer/Shadow Worker after all!), I realise that its not something that I’ve actually said or done but it’s connected to their insecurities being triggered by my energy. Again, not necessarily that I’ve done something but they’ve gotten too close to my energy and whatever they have been holding back from in themselves (insecurities, shadows, fears) is brought to the surface for them to heal. It’s a good thing to have those brought up – it means your soul is asking you to heal this area of your life to grow further and move on with your journey. But people don’t always see it like that – so then they go quiet on me or bad mouth me and don’t realise that it’s their growth they are hindering by choosing to ignore what’s been triggered within them.

Such as last year…there was someone in the spiritual community who I became really good friends with. We just hit it off and had so much in common – I’m super grateful she came into my life because it was thanks to chatting with her and developing a deep friendship together that I started to understand things in my own life and she inadvertently highlighted all this to me through her own experiences. She was aware of my energy and how shadows/insecurities/fears can be brought to the surface around me and even admitted once that she was feeling jealous of me – I had to ask why because at the time I was 1-2 months out of my marriage, was getting shut done by Spirit constantly so I couldn’t work (because I wasn’t listening that I needed time to rest and recover energetically!) and had hardly any clients at the time unlike her – so I had no idea why she was jealous of me! But she knew this was a shadow coming up and her own insecurities were haunting her. But then she slowly started distancing herself from me, wasn’t the chatty funny person I’d gotten to know, wouldn’t always respond to messages and just became a different person despite my attempts to have conversations with her like we used to have.

And then one day, without saying anything to me, she decided to unfriend me on Facebook and started talking on her public profile about how she’d had to let someone go from her life. At first I was upset because I’d confided in her loads (and she had with me) and I couldn’t understand what I had done. Yep…I thought it was me. Again. Because at the time I would question myself…until I spoke with another friend and she said something really important to me that has stuck with me since:

“Stop feeling bad about triggering those people. They need to learn to be in control of their mind and their emotions. They are reacting instead of responding which meas they are giving their power away”

Thanks Jasmine! What she said made perfect sense to me – just because someone isn’t vibing with you doesn’t mean that it’s something you’ve done. If someone gets triggered by you (when you haven’t said or done anything to them directly and are just showing up as your most Authentic Self and shining your light bright into the world) then that speaks volumes about them not being in control of their own mind and emotions because they’ve allowed someone to inadvertently affect them.

After that moment, I stopped apologising for who I am. If people didn’t like my energy because they found it too overwhelming, then it just meant that we aren’t supposed to be around each other and that it’s not my problem. To just let them go and for us to both move on and wish each other well.

I attract a lot of people to me and I am always told how powerful my energy is (even though I just take it for granted that this is who I am and who I’ve always been) – and yet, not everyone stays connected to me. Some get triggered with their own insecurities and some just fall by the wayside and we go about our lives separately. That’s totally cool – people are supposed to come and go in our lives all the time, we all serve as a teacher or a student in each others lives.

I’ve learnt to embrace my energy more and more because it’s what makes me unique and who I am. We all have different soul gifts – and the energy I have is there for a reason, it’s what my soul chose for this life and it’s what I’ve developed over many lifetimes – it’s part of my purpose as a Soul Catalyst, to be an activator and a catalyst for someone’s growth.

We won’t all vibe with the same people and that really is ok. I always joke that I’m not everyone’s cup of tea….just like not everyone is mine. We all relate better to certain people more than others – perhaps it’s because we come from the same soul group so we possess similiar attributes and interests. Or from a similar soul group where there are similiarites but also a lot of differences too.

You won’t vibe with everyone. What I’ve found is that the more that I embrace my own energy and my soul’s purpose and be happy with who I am as I lean more and more into my Authentic Self, the more I’m attracting those people to me who can be in my energy – and those who aren’t on the same energetic level as myself just don’t stick around. That’s totally cool for both of us – as we all have different journeys and should respect that with each other.

Are you honouring your own energy?!

I choose to set boundaries with my energy now – I know when people are taking too much from me and basically taking the piss. I used to have people dropping in my inbox all the time asking for free Tarot readings or free intuitive guidance – probably because I’d learnt from so many others in the spiritual community (those with a crappy money mindset!) to just give give give everything away constantly (and I wondered why I felt drained!) – if you’re doing this and giving all your time and energy away for free, do yourself a favour, and stop! You’ll notice a big difference in your business! You are worthy of being paid well for what you do – remember that!

Don’t get me wrong, I’m more than happy to offer this when I decide (because that’s me choosing to be in control of my energy – a huge difference!) – not when someone just asks and doesn’t respect my time or my energy – and often do this for close friends or long-term clients who I want to offer something more to.

That’s why it’s so important to tune into your energy and learn when people aren’t vibing with you so you can empower yourself to retain your energy for those who do vibe with you. Learning to sense others intentions is such a powerful tool and I love this about myself – like when I get a random friend request on Facebook and a follow up message of something like, “Hey girl…how are you?”. I sense their energy straight away and immediately know they are going to try and sell me something instead of building a relationship first!

It’s ok to say goodbye to the energy vampires around you – those who drain you, those who don’t make your feel good about yourself, those who just want from you all the time without giving anything in return to the connection. When you do this, you are setting the boundaries for yourself with what you will and won’t accept and it’s so liberating because you truly feel more energised because you are more mindful of how you share your energy. In doing so, you are freeing up space for those whose energy does light you up, those who make you feel good about yourself and also your soulmate clients who respect your time and energy and are willing to pay for this.

However, here’s a big tip, if you do choose to let someone go from your life because your energies aren’t vibing, make sure that this is always because you are on different paths right now and not because they’ve triggered your shadows/insecurities/fears within you and you are unwilling to do the inner work that your soul is showing you. By all means, let them go, but empower yourself with what they’ve highlighted to you by doing the bloody inner work! Otherwise you’ll end up going round in circles constantly attracting the same people to you who will trigger you over and over again…until you take action to do the inner work to understand those triggers.

I’d love to know how you connect with your own energy and your own stories of not vibing with people and being ok with this!