An Empire Is Normal To The Aliens Amongst Us 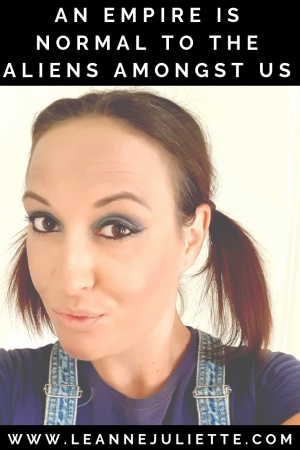 Saying you’re creating and Empire seems alien to many.

Because most cannot comprehend the actual vision that must be brought through to actually create said empire.

And so they stick within the safety net of a business.

But to the aliens amongst us?! An Empire is normal…its out galactic vision!

Have you ever felt that no matter what…people just don’t understand your vision? That it’s like they look at you with 3 heads (you’re an alien afterall!) or tell you to curb your vision or that it seems impossible or that you’re dreaming too much and just need to get back to reality.

You mean sitting in this 3D reality matrix system where people are overworked, overstressed, fed up, tired and unfulfilled?!

Yeah…thanks but no thanks…I’ll stick with keeping my head in the Cosmos thank you very much!

Do you know how fucking long I spent trying to conform?! To fit in?! To follow the “rules of business” because…well…I looked up to those who had already created multi 6 and 7 figure businesses and told myself that they clearly know something about business.

(And they do – because it’s what works for them).

So I shall listen.

And listen I did.

And implement their systems and strategies I did.

Not because I didn’t try hard enough (and that’s a problem in itself when you think you need to try because it’s a clear indication that you are not – in fact – doing what your soul came here to do.)

Not because I didn’t listen – I did. Countless hours spent listening to trainings after trainings from multiple people and telling myself that “maybe, just maybe, this will be the key I’m waiting for”.

An abyss of nothingness.

And a deeper sense of frustration within me.

Because – I knew deep within me that I am here for more.

Here for something far greater than most can possibly comprehend.

When I “woke up” aka my spiritual awakening in 2017 – I woke up that inner magic. My voice. My soul’s yearning.

Because I’d been “trying” (and I’m laughing as I write this!) to be an Entrepreneur since 2012 when I joined an MLM business.

I’d been “trying” to build a business.

“Trying” to put myself out there – to be seen, heard and respected for the work (whatever the actual fuck what was!) I was here to do.

And that’s the mistake I made.

And that countless other Empire Builders amongst us make.

The Visionaries. The Rebels. The Impacters. The Disruptors. The Magic Makers.

We “try” too fucking hard to be like everyone else.

Following the rules of business.

Following the supposed path of success that many before us have taken.

When in reality – have they actually taken our path?!

You know, the one that we…the Empire Builders…are here to pave into the multi billions?!

And that is where we go wrong. Because we look to others for the answer instead of looking within at our own magic, our own resources and how we can unlock and activate those.

We look to others for the answers to build a business.

When in actual fact we should be asking ourselves “how do I create an Empire?!” – and seeking out those who know  how to unlock and activate our Empire Soulprint.

Those here to implement Collective change on a massive scale.

And that’s why the Rebel Visionaries are here.

Because – sweet soul – we don’t do rules.

Where we come from?! It’s fucking limitless.

We’re the Rule Breakers. Not the Ruler Makers.

Complete autonomy to be whoever the fuck we desire to be. We create change. We blaze a path of fire behind us as the Trailblazers we are.

We create Empires in a way that hasn’t been seen before. Because it hasn’t. Because we don’t follow the traditional way of “doing business” – you know, the boring as fuck way for us.

All in. Or nothing.

Not waiting years to receive the fruits of our labour. Because we know we hold soul blueprints to literally collapse time around us and go from $0 to $1M in less than a year.

When we show up.

When we understand that we are Empire Creators. Not business builders.

Do you see – or even understand – the difference?!

Because it sure as shit took me years to understand!!! And left me frustrated as anything at how I couldn’t possibly seem to get a chance to grow. How no matter what I did – what offers, services, products I put out there – I still had no Stripe or PayPal pings on my phone.

Complete silence. Maybe the occasional ping for something I’d put out in desperation but actual left my soul feeling deflated.

I’d be sat there frustrated.

Because – fuck it – I knew I was here to blow up with massive success. To make millions. And billions. To impact millions around the world. To be a sought after motivational speaker, highly respected Spiritual Leader, a New York Times Bestselling Author and kickass Mentor.

And yet – still nothing.

And I spent more money with other coaches and mentors who seemed to have the magic key.

And I would be left even more frustrated because it was the same old stuff I was learning – just from someone different.

(And this is no disrespect to anyone I’ve worked with – I value everyone. And I take lessons from everything.)

So the doubt crept in.

“Maybe I am doing something wrong?!”

“Maybe I just have to stop being so rebellious with what I’m being told?”

Yeah – how’s that work out for a Visionary Rebel?! LOL – not very well!

I reminded myself that I’m not here to grow a business like others. To me, that’s boring as fuck. Re-creating something that has already been created?! Pur-lease!

I reminded myself that I am backwards. Different. Outside of the box. Messy, chaotic Genius. And that I’m not supposed to build a business following the same tried and tested methods of so many.

I put my motherfucking crown on and reminded myself that I’m here to create a fucking Empire into the billions.

Not build a business.

And that level of Empire commands respect.

It commands a maelstrom of everything mixed together. Churned. Turned. Messy and chaotic. No rules. No systems. Just complete autonomy to just do it our own fucking way with all of who we are.

Every fucking essence of who I am. Who I’ve been. And who I’ll continue to be.

It’s in my fucking DNA. Part of my Soul Blueprint.

All the High Priestess.

Everything mixed together into a perfect storm of complete chaotic beauty.

Everything included in this cacaphony of Genius.

That level of vision – is Galactic.

Because we aren’t like the humans amongst us. We’ve tapped into that Galactic Consciousness that is already way ahead of anything we have here on Earth.

And we’re the Messengers.

Bringing that kind of consciousness into the now. And it’s different. It feels different to most. It appears to be messy. Too chaotic. No cohesion.

To the Messengers amongst us – it just makes perfect fucking sense. It feels so fucking good! Makes us feel alive! We thrive on that platform of Galactic Consciousness. Because we understand it’s energy.

The energetic cohesion that brings about the magical infusion we are here to implement through our Empires.

Why’d you think films about space have huge motherfucking spaceships?!?!? They don’t fly around in little tinny machines that look like everything else.

They are huge fucking ships created to withstand the environment around them. To move seemlessly through space and time.

And they command respect. Their presence oozes…

Everyone wants to be on that ship – because it offers something different.

It intruiges people. Even those trying to blow it up. Because they cannot understand that level of power or genius. So they seek to destroy it.

And that – my friends – is why the Empire Creators amongst us are so often misunderstood.

Deemed too much with our heads in the clouds. Or in the Cosmos…I prefer that term 🙂

Told to box ourselves off.

Get down off that platform.

Stop being too much.

That’s why when your an Empire Creator – a revolutionary Trailblazer like myself – here to impact millins through your vision and purpose – you have to put those fucking blinkers on and only be available for the kind of truth that speaks directly to your soul.

Which activates your Empire Blueprint.

In a way that has never been seen before. Because – well – it hasn’t. That’s why you’re here.

And not seek to be anything other than all of you – a perfect storm of beautiful messy chaos. Bringing every element of your unique energy to the table.

Not leaving anything out.

Not seeking to be like anyone else other than who you are.

Not chopping a limb off to conform or fit in.

Not watering down your energy or essence.

Your vision chose you, remember?! Because you are the perfect vessel – Messenger, Artist, Creator – for that vision.

And for that level of Empire that will literally revolutionize the world we live in.

Are you ready for your Empire?!