How Do You Connect With An Awakened Woman? 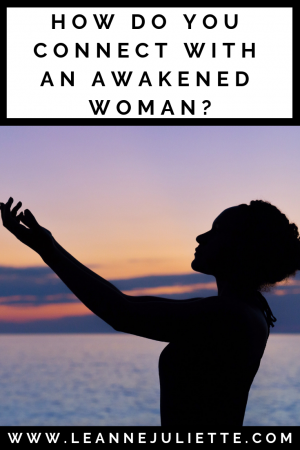 I hear this a lot in the spiritual community about connecting with awakened men and women. And felt called to shed some light on this to explain it all a little more.

What does it mean to be awakened?

18 months or so ago I had zero idea about the terminology of things like:

It was because of my own spiritual awakening around 18 months ago (you can read about my story here!) that I started to become involved with spiritual communities on Facebook and started hearing terms like those above. I’ve always been spiritual…but my awakening was like a big catapault into who I am at a soul level.

Awakened means that you are awake to who you are…who your soul is…you are awake to the concept of being a spiritual being having a human existence and learning what there is to learn here at “Earth School” as my dear friend Leslie calls it (she’s bloody awesome, connect with her here!!!)! Being awakened means that you see yourself…you see your soul, you are starting to understand who you are and why you are in this life and what you are here to learn etc. You start to connect the dots that we are all connected on an energetic level and that every thought/feeling/person/situation/experience is connected. You understand that you are a soul…a spiritual being…and you are awakening the DNA within you that you’ve built upon lifetime after lifetime to be able to deliver your soul’s purpose to the world.

You also recognise that there’s a lot of bullshit in the world…a lot of ego…that is part of the patriarchal society we are moving away from as we move further into the Age of Aquarius. The society that says who we can and can’t be. The society that says that women are to be subservient to men. The society that has punished and persecuted people (especially women!) for being their Authentic Self and using their intuition/abilities/soul gifts to benefit others. Witch hunts anyone?!

That, my friends, is what it means to be awake. You see through it all…and see how you fit into the bigger picture of the Universe.

So what does it mean to connect with an Awakened Woman?

In this blog post I’ll just refer to connecting with Awakened Women (because, well, I’m an Awakened Woman LOL) but the same also goes for Awakened Men (like Jim Carrey, Russell Brand and Keanu Reeves!)!

Awakened Women know their worth.

They know who they are.

Not just on a surface level…but deep down within their soul, they know who they are…or are at least in the process of discovering that there is more to them and that they are a soulful being as they awaken.

Think of the Awakened Woman like a Goddess. Because, well, she is!

Long before the patriarchal society we’ve been living in…women were revered as the Divine Feminine.  The co-creator. Someone to be worshipped as a Divine being and as a Goddess – someone who is highly intuitive, in tune with her feminine energy and the energy of creation – women were recognised as powerful creators back then (I’m talking millenia…like Ancient Egypt and Atlantis and Lemuria) because we are – we still are – we bring life into the world.

And it’s no coincidence that life begins in the area connected to the sacral chakra – which is the chakra connected to Creativity.

And she knows her worth. She knows that she’s different to other women. The women who aren’t awake yet. That’s not a bad thing to be unawakened, we are all on different journeys and some of us chose to “wake up” sooner than others. And some may not in this lifetime. Every soul has a unique journey.

An Awakened Woman wants to be valued for who her soul is and what’s in her mind. For some, she may be seen as complex or unobtainable or intimidating. She’s not though, you just haven’t tuned into her energy and how she thrives with connecting at a soul level. That she wants to be seen for who she is…whats beneath the surface (beneath her features), what makes her who she is, what makes her unique. She wants to be seen…through the eyes of your soul.

In a world of social media and selfies and the Kardashians and Instagram Influencers, there’s so much cover-up about who we are. Women don’t feel confident with sharing their naturalness – like a makeup less face, or an un-airbrushed photo, or an unfiltered photo. It’s all become very superficial. And it’s starving us of soul.

Don’t get me wrong, I love to wear makeup and do my hair….I’m eyeshadow obsessed! But I don’t go along with needing to be seen superficially….I want people to connect with me because of who I am at a soul level. Connecting through my mind to reach my soul. Now that is sexy! When a man (or woman) wants to know you…wants to see you…and get to know your soul.

Connecting with an Awakened Woman is like opening your Christmas presents as a kid…you know there’s something really cool waiting for you underneath the gift wrapping!

Because an Awakened Woman can show you your worth.

She can show you your soul.

She knows her worth – she knows that some can’t handle her. But she doesn’t want just anyone. She wants someone who will show her the stars and the moon and the galaxies. Someone who can speak to her soul through the language of energy.

She has clear boundaries as to how she wants to be treated.

She knows her mind.

She wants you to step up to your own mark…be the someone who recognizes his own value (or her own value), who knows that he/she is worthy of being with this Awakened Woman. Someone who knows that by being with this Awakened Woman that it’s a deeper soul connection that influences both of your lives. It’s about the souls dancing together in harmony.

How do you speak to an Awakened Woman?

One of my best friend’s, John, was always like that. He’s in Spirit now and I miss our conversations. When our friendship first began we would sit in the local bookshop drinking coffee for like 5-6 hours just discussing everything and anything!!! Whatever we wanted to discuss about the world or the Universe or anything spiritual (because I’ve always been spiritual ever since a young age) we would discuss. All. Day. Long! It was great!!!

Even though this was purely a platonic friendship, he knew how to speak to me. Through my mind. And through my soul. Discussing things that lit me up. Showing an interest in me. Finding a mutual fascination with certain subjects and just going deep with these conversations.

John was very woke LOL – before I even knew what that meant!

I’m not saying that all Awakened Women (and men) want deep conversation. But…what we do want is someone to speak with us as if we are the only person in that room. Like what we say matters. That just getting to know what makes our minds tick…and our souls sing…is like the icing on the cake for you – that it brings you joy. To see enjoyment that she has from being with you and being treated as an equal. That…is powerful! And sexy!

With an Awakened Woman, you connect with her through her interests and what sparks life in her:

But above all, she commands respect. Not just for her time…but her energy. Because her energy is powerful. When an Awakened Woman is fully connected with who she is and what she’s about, when she’s the embodiment of the Divine Feminine (the Goddess), she is a force to be reckoned with. She’s highly intuitive, she uses her mind to communicate, she’s developed and fine tuned her psychic abilities, she’s sensitive to energy and knows when something feels off and she’s very in tune with her existence as a co-creator with the Universe.