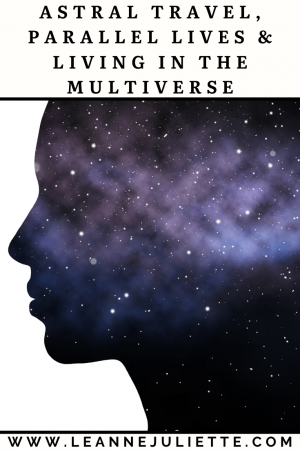 Astral travel is something I love to do and the concept of parallel lives is something that’s always fascinated me for years and more so these last couple of years since I dove further into my own spiritual journey. This fascination has radically progressed my own understanding of parallel lives and the Multiverse through my Astral Travelling.

A bit of background history about myself…I’m super psychic, intuitive and use all my 4 main clair abilities (claircognizance, clairvoyance, clairsentience and clairaudience). I’m also a powerful Empath known as a Heyoka Mirror so I really feel energy and the Mirror aspect of myself is why I’m such a potent Witch when it comes to working with shadow with myself and clients.

I’ve always been a vivid dreamer for as long as I can remember which is part of my clairvoyance. I didn’t have my first “conscious” astral travel experience until 2.5 years ago after my spiritual awakening had already begun. By “conscious experience” I mean that I was fully aware that I was astral travelling (astral projection) instead of doing it in my sleep and not realising.

The more I’ve dived deeper into my own spiritual journey, the more I’ve become so accustomed to astral travel and this has opened up an understanding of parallel lives and the Multiverse that I never could have imagined previously.

Side note – I never learnt how to astral travel, it’s something my soul is soooooo comfortable with, that is, playing in the astral realm. I did it consciously one day when I was super relaxed (didn’t have a clue what was happening at the time though!) and since then…I just like to “pop off” on my travels.

My astral travels fascinate me. I’ve been all over the universe to different galaxies, to Ancient Lemuria, to Egypt…visiting places of past lives where my soul feels super familiar (or should I say “parallel lives”…just to fuck your mind up a little!). I have been to “cartoon like” worlds that are pink bubblegum colour with cartoon trolls and unicorns singing and dancing for me. I have even been into the “future” to a specific year over 200 years from now where I witnessed people using chips in their body to access buildings etc and this was normal.

My recent astral travels are what have inspired this writing today. As a gifted Astral Traveller, I now see a reason for me travelling so much so that I can share the concepts that I learn whilst travelling.

This morning I “popped off” as normal after I’d woken from sleep and wanted to go back to sleep. I know when I’m about to go travelling because I feel the famililar “roll out of my body” sensation and then go whooshing off. I clearly love to fly! I once even heard myself say, “wwweeeeeeeeeeeee!!!!!!”, as I zipped off! LOL!

The thing with astral travel is that we are conscious of what we are doing and I like to recite in my mind what is happening so that I can fully remember when I awaken. I also know that I can wake myself up at anytime.

This morning I felt myself floating but no whooshing down a tunnel like I usually do. Just floating in a room that appeared like a red-wood room that seemed like a library. Once I’d finished floating backwards, I floated around the room going anti-clockwise.

I was in a shop. A Victorian era shop. The women behind the counter were dressed in Victorian clothes such as the long black dresses with white frilly aprons and those frilly white cotton hats. It was like a cake or tea shop. One of the women looked directly at me and smiled as I floated past her.

She knew I was there. But wasn’t fazed by it. I floated around and passed her again and she continued to look directly at me with a smile on her face.

I knew this was a parallel aspect of myself that I was visiting. She recognized me. We both felt comfortable with each other.

In another travel this morning (I’m going more and more frequently, like, 2-4 times in one go so I’ll come back and go again) I was in a black room and heard footsteps on the tile or stone floor.

I was in a hotel lobby and saw a man walking in. A stout man. I knew he was German. He had one of those handlebar moustaches and a strong jaw-line. He walked to the reception desk to check into the hotel. I was observing from the side. The hotel wasn’t modern. It was like a burgundy wood and a bit dour.

The man behind the desk checked him into Room 6. It was only a small hotel with 10 rooms. It appeared like the hotel was actually in France. A feeling I had.

The German man had a specific name such as Mr Kittinger/Mr Tattinger/Mr Killinger and it was the year 1931.

He turned around to then walk to the entrance of the hotel where I was stood. I believe he knew I was there, observing.

Outside the hotel, suddenly everything disappeared as a bomb had been dropped. Killing everyone.

I woke up and actually went travelling back to this hotel. The German man was waiting for me in the lobby. He showed me outside and all the souls who’d died and asked me to help move them into the light.

I remember thinking, “Ooooh, am I now being visited by those in spirit who want me to move people over?!”.

The scene felt very calm as I looked out onto this Square where all these people had died but didn’t see the bodies.

Again, the same with the other astral travel with the Victorian woman, I knew that this was an aspect of myself that I was remote-viewing.

So, now that I’ve blown your mind with my astral travel stories of parallel lives, allow me to drop a mind fuck into your head…

We are all Multidimensional Beings living a human existance right now. Our soul is multi-faceted, meaning, there are multiple aspects of our soul having an experience right now.

Right now, you aren’t just living this life….nope, you are living multiple lives across the Multiverse. You are experiencing multiple experiences in any one moment.

Which is where the concept of timelines comes in. Something I frequently speak about in videos and with clients. There is no such thing as “time”…because “time” is a human concept that was developed to allow us to organize our days. Yes, the sun rises and sets daily. But the concept of actual “time” is an illusion.

Everything that we can conceive in our mind is like a viewing portal to see what is truly possible. The vision you have for your life is your vision…because it’s something that is available to you right now in another reality.

In a parallel life.

You see it or feel it or know it…because it already exists.

We are Co-Creators with the universe because energy is fluid. Energy can be manipulated by our own energetic framework so that we are on the most optimal timeline.

An interesting reference point is the whole coronavirus “pandemic”. Or, more accurately, “plandemic”. I’ve said from the start that it was all manufactured. The virus (if it “does” exist) or at least the situation was manufactured. But that’s another rabbit hole to dive down!

March 2020 is a perfect example of timeline shifting and parallel lives. About a week before the UK imposed a lockdown quarantine to all citizens, I felt such a feeling of oppression and anxiety. As an Empath, I really feel Collective energy. The anxiety was heavy!!! I knew it wasn’t my own anxiety and that it was an energy of something far worse was coming (at the time we weren’t in lockdown) and a week later, it was announced that the entire country was being locked up (house arrest, anyone?!).

I felt the timeline shift. Immediately.

It blew up and ceased to exist.

It felt like humanity had been trundling along in some Stone Age car (think Fred Flintstone in his stone car and running his legs under it…that’s the vision I saw) and suddenly a huge bomb was dropped into the path and descimated the path.

And in its place was a weird and completely fucked up timeline that nobody could have perceived which felt like we were all characters in some really weird and freaky movie with the plot being written by Stephen King.

That’s how a timeline collapse felt.

At the same time though, multiple timelines were springing up out of the debris and destruction of the one that had just collapsed. Including timelines where the “plandemic” was far worse that what actually transpired. Currently, I believe the death rate of covid cases to those who have tested positive is something like 0.26%. Allow that to sit with you. A collapsed economy worldwide, suicide increases, people thrown into poverty, higher unemployment, children traumatised by it all…for a 0.26% death rate.

And yet, somewhere, in another parallel existence on another timeline…the situation is far worse than our current reality. Far worse. Perhaps in another reality Bill Gates has ousted Donald Trump from his presidency and now Bill Gates is POTUS.

And in another reality, the coronavirus never appeared.

But in the timeline we were on at the time, the “coronavirus” needed to appear as a catalyst to shake shit up with humanity, dredge up all that shadow and facilitate The Great Awakening.

I’m telling you all this to give you context to how parallel lives and the Multiverse operate. Everything exists concurrently. Meaning we all have multiple aspects of ourselves all existing currently in multiple realities and versions of who we are.

Right now, there’s an aspect of myself who is still with my ex-husband and feeling miserable as fuck because she doesn’t have the confidence to leave.

Right now, there’s an aspect of myself who already has the multi-million pound Spiritual Empire that current me is creating.

Right now, there’s an aspect of myself who never met her Twin Flame at University because she chose to do a 3 year degree instead of a 4 year degree and so had already graduated before our fated meeting.

There are always multiple aspects of ourselves at any one time existing and we are able to constantly change the trajectory of our lives by making a decision and allowing ourselves to be guided by our intuition.

Choosing to stay in a shitty relationship means you will never meet the actual love of your life who exists right now in another reality.

Choosing to ignore the calling of your Highest Vision to lead and serve others through your unique gifts means that those souls you have a soul contract with to work with will never experience the magic you have to offer.

Choosing to see your job as secure income means that you’ll never take a leap to create your own income as and how you please.

Choosing to continue with the beliefs that your parents/society/school drummed into you instead of seeing these as illusions and not your beliefs means that you continually hold yourself back from the greatest life you can have.

Choosing to buy into the illusion of race rows means that you never adopt the belief that we actually are all One Consciousness so you continue to live a life of Division.

Astral travel is a fascinating way I’ve been able to develop my own understanding of parallel lives and the Multiverse. Such as receiving guidance from the Consciousness of my new Spiritual Empire Academy that is launching 22nd July telling me the energy it desired to have which prompted changing the launch date. It’s a Leo energy…and told me as such!

(Everything I lauching in my business is infused energetically with Astrology and the energetics of numbers).

I’m curious…do you astral travel? And do you incorporate what you learn from your travels into your life and/or business?